Senbei (煎餅, alternatively spelled sembei) are a type of Japanese rice cracker. They come in various shapes, sizes, and flavors, usually savory but sometimes sweet. Senbei are often eaten with green tea as a casual snack and offered to visiting house guests as a courtesy refreshment.

Senbei are usually cooked by being baked or grilled, traditionally over charcoal. While being prepared they may be brushed with a flavoring sauce, often one made of soy sauce and mirin. They may then be wrapped with a layer of nori. Alternatively they may be flavored with salt or 'salad' flavoring, among others.

In China, the same characters used to write senbei are read jiānbǐng (煎餅). There are varieties like Shandong Jianbing and Tianjin Jianbing. However, these are in actuality a different food. In China, they are more like wraps and pancakes, similar to okonomiyaki, whereas in Japan they are hard (not floppy), and are bite-sized snacks rather than meals. However, crackers similar to Japanese senbei can be found in China today. Their modern Chinese name is 仙貝/仙贝 (Pinyin: xiānbèi), which reflects the Japanese-language pronunciation of 'senbei' (煎餅).

Sweet senbei (甘味煎餅) came to Japan during the Tang dynasty, with the first recorded usage in 737 AD, and still are very similar to Tang traditional styles, originally often baked in the Kansai area, of which include the traditional 'roof tile' senbei. These include ingredients like potato and wheat flour or glutinous rice, and are similar to castella cakes. (Distinctly different from what most people would consider as Senbei today). Traditional senbei such as this can still be found, e.g. Iga meibutsu katayaki, in Iga City.

What Japanese commonly refer to as senbei nowadays was popularized by a shop in the Edo period, Sōkajuku, which spread salty soy sauce flavored senbei throughout Japan.[citation needed] 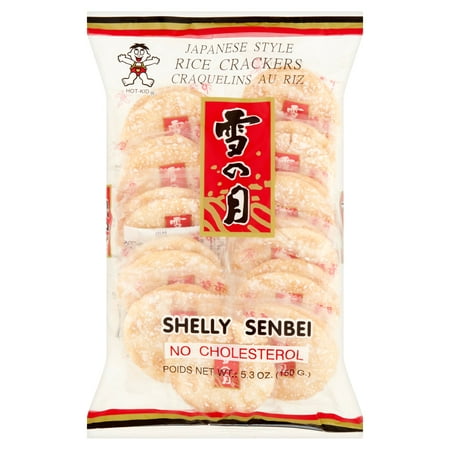 There are several types of traditional Japanese senbei. They include the 2 categories, sweet sembei (over 15 types)[citation needed] and rice candy senbei (米菓煎餅), and others, which include even fish senbei (魚せんべい), lotus senbei (蓮根煎餅) and bone senbei (骨せんべい).

Modern senbei versions are very inventive and may include flavorings which can range from kimchi to wasabi to curry to chocolate.

Kansai senbei tend to use glutinous rice and are lightly seasoned and delicate in texture (saku saku). Kantō senbei were originally based on uruchimai, a non-glutinous rice, and they tend to be more crunchy (kari kari) and richly flavored.